Drawing specifically from the flow-sequence occurring between the exterior of the building and the natural environment, to the culturally dense interior core of the library, the artwork concept is to express the relationship between the environment and culture through the generation of an abstract hybridized material-based map of Kyrgyzstan.

Drawing inspiration from geological, resource and topographical maps, a hybridized map was produced to serve as an underlying template for the artwork.  The underlying template map indicates topographical and material shifts related to transitional changes occurring along the relationship spectrum between the natural environment and the cultural heritage of Kyrgyzstan.

The Environmental-Cultural spectrum shifts from the isolated mountain ridges of Tien-Shan, to the dense collective of community of Bishkek.  Along this spectrum occurs an evolutionary stratification of behavior and response.  The diagramming of this stratification suggests an associated material spectrum that runs concurrent with the Environmental-Cultural spectrum.  The overlaying of the material-behavioral stratification diagram with the underlying template map produces a 3-dimensional artwork composed of various local materials varying from travertine to felt.

Utilizing local crafts persons and available guilds the artwork offers a degree of community involvement through active participation.  Various elements of the artwork would be source-out locally to include the skills and talents of the local community.    The installation would require the participation of local builders to fabricate individual components and assemble the artwork by-way-of artist provided construction documents.

As the individual moves through the landscape a relationship is formed through opposing forces.  The isolation and solitude of the mountains has shaped the history of nomadic tribes in and out of Kyrgyzstan for centuries.  As the water from the mountains has carved pathways through the land the power of erosion has provided opportunity for vast openness.  The openness of the plains and great steps of the landscape have cultivated settlement, trade-routes and cultural density.  Regionally, the mountains of Kyrgyzstan belong to a greater collective of landforms that hold the stories of trade, settlement and community.  The relationship between humans and the land has shaped traditions, behavior patterns and cultural responses.

Human nature encourages as sense of curiosity and a need for discovery.  This urges is limited by the restrictions of the natural environment.  The mountains serve as a restricting barrier, protecting from surrounding cultural threats, as well as inhibiting passage.  The limitations of the mountains are opposed by the expansiveness of the plain.  The fertility and openness associated with the plain cultivates settlement, trade and craft.  Through the aggregation of culture through the erosion of environmental dominance, participation of the individual in community is encouraged.

The resulting artwork is comprised of many smaller components that are assembled as a collective whole.  Conceptually referencing the individual and the whole, the artwork serves as a metaphor for an introspective into the relationship between the individual and the landscape, as well as the forces that have shaped cultural behavioral patterns.  Similar to the stitching together of various settlements by the cross-continental traverse of the Silk Road, the artwork weaves various materials into a 3-dimensional Environmental-Cultural fabric.  Referencing traditional textiles arts; as well as other comprehensive collective traditions, such as the oral assemblage of Manas, the artwork highlights human activity as it has been shaped by the landscape. 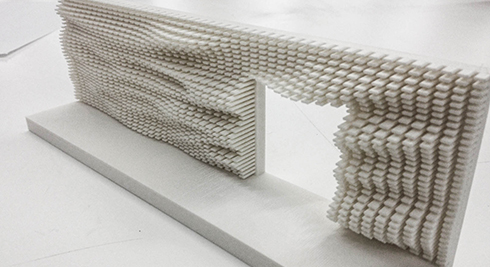